We are considering extending the Bakerloo line to improve transport connections in southeast London and to enable growth in homes and jobs.

An extension of the line to Lewisham via the Old Kent Road and New Cross Gate has been chosen as the best option to achieve those goals.

We are also considering a second phase of the extension beyond Lewisham to Hayes and Beckenham Junction. This would involve converting the National Rail line via Catford to Hayes to a London Underground operation.

What a Bakerloo line extension would bring

The route would have a frequent Tube service, improving journey times for customers and offering better connections within southeast London, and into central London.

The plan is to: 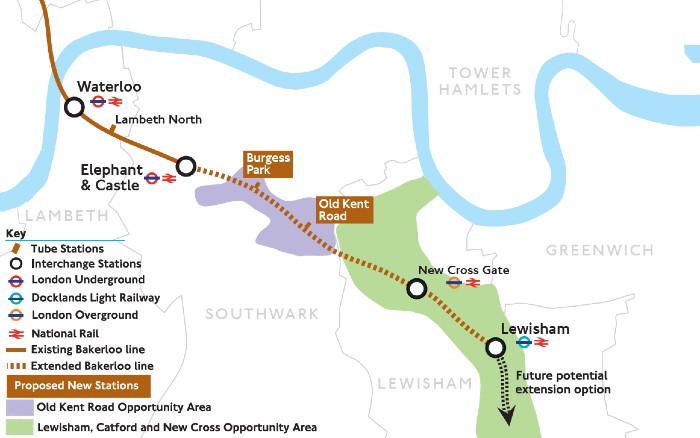 The 2019 consultation included more detailed proposals for the tunnel route, location of tunnelling worksites and the possible further extension to Hayes and Beckenham Junction.

Just under 9,000 people responded to the consultation. Most respondents (89%) made positive or supportive comments about our proposals. There was also support (82%) for a possible further extension to Hayes and Beckenham Junction.

The Secretary of State for Transport has issued directions to safeguard land needed to build the proposed Bakerloo line extension. Safeguarding is a formal process done by the Department for Transport to protect land above and below ground from conflicting future development. The safeguarding process does not give powers for the extension to be built.

You can see the safeguarded route on our interactive map.

The coronavirus pandemic has had a huge impact on our network and finances. We remain committed to delivering the Bakerloo line extension, however this still depends on a viable funding package being put together.

We will continue discussions with the Government, while being realistic about the funding London could contribute to building an extension over the coming years.