A new entrance and ticket hall at Elephant & Castle Tube station will support the creation of new homes and jobs in the area. Initial works have started - we expect the first phase of works at the station to be finished by 2026.

That's when we should be able take over from the developer to finish Stage 1 of the project, including excavating the new passenger tunnels that will connect to the existing passenger platforms.

We have secured funding for Stage 1 works from the GLA, Southwark Council and local developers. Stage 2 of the project, the station fit out, will be delivered once additional funds are secured.

Why we're doing the work

Creating space at the station for more people and services - and an accessible interchange between the Northern line and local bus services - is critical to plans for 5,000 new homes and 10,000 new jobs in the Elephant & Castle Opportunity Area.

A new entrance at the heart of Elephant and Castle Town Centre will eventually include new escalators and lifts offering step-free access from street level to platform on the Northern line, and improve station capacity by over 30%.

Further in the future, as part of the proposed Bakerloo line extension, customers would also be able to enter a new ticket hall for both lines.

Work to build the station box of the new TfL station started in January 2022 and will last for around 4 years. The station box is a reinforced concrete structure that will form the shell of the new station entrance and ticket hall:

We currently have a live published Prior Information Notice for suppliers for the next tranche of third party-funded works. The work will involve:

We're now finalising our procurement strategy following our Supplier Engagement Day in May 2022. We expect to go out to tender in early 2023.

What we've done so far

We used the opportunity of the part-Northern line closure from January to May 2022 to prepare platform areas and the overbridge for main tunnelling works. We have: 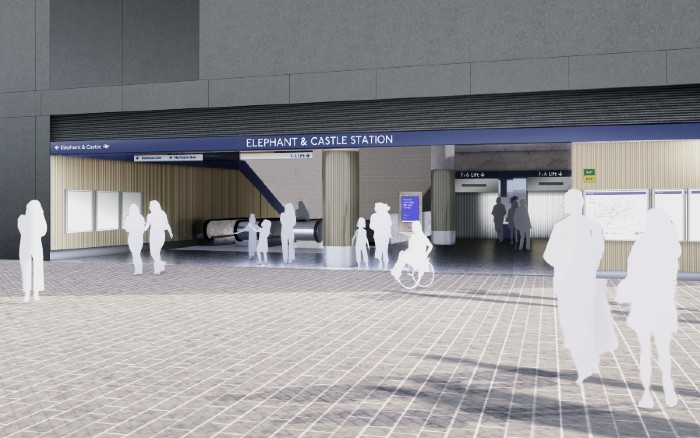 April 2022: We issue a Prior Information Notice (PIN) for the remaining third party-funded Stage 1 works, including the passenger tunnels, and announce a supplier engagement day to take place in May 2022.

2017: Plans for redeveloping Elephant & Castle town centre are submitted to the London Borough of Southwark, including the provision for a new station entrance to replace the current Northern line ticket hall.

2012: Elephant & Castle Opportunity Area, adopted by Southwark and the Mayor of London, sets out a framework for development in the area until 2030, including the identification of a strategic need to upgrade Elephant & Castle Tube station.