Safety advice and information for drivers and other road users.

Using a mobile device while driving

It has been illegal to use a handheld mobile phone or electronic device while driving, or while stopped with the engine on, since 2003.

The use of apps, for example for navigation, on a cradle-mounted phone is lawful if done with common sense and good judgement. The government offers further guidance on this web page.

Between 6 April 2016 and 27 February 2017 there were 9,560 mobile phone offences in London, while in 2015, 2 people were killed and 5 seriously injured in collisions where a mobile phone was a contributory factor.

Many drivers use their phones hands-free as navigation devices. It's important to understand the rules about where they can be safely mounted.

You shouldn't put or fix anything on your windscreen that will obscure your view of the road ahead. 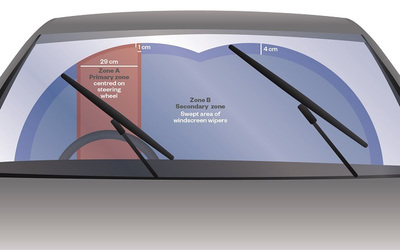 If you place a cradled device on the area on your windscreen that is covered by your wipers (also known as the 'swept area'), you are committing an offence. At present, if you're prosecuted, you face a fine of up to £100 and three points on your licence.

Driving conditions can change rapidly, and hazards such as pedestrians suddenly stepping in front of you mean you need to have a clear view of the road. Having a cluttered windscreen increases your likelihood of becoming distracted or not spotting potential dangers.

In Great Britain, if you use a suction-mounted cradle that intrudes more than 4cm into the secondary (blue) wiper clearance zone, or more than 1cm into the primary (red) zone, you are committing a serious traffic offence (Road Traffic Act 1988). Your vehicle would not be considered roadworthy and would fail an MOT.