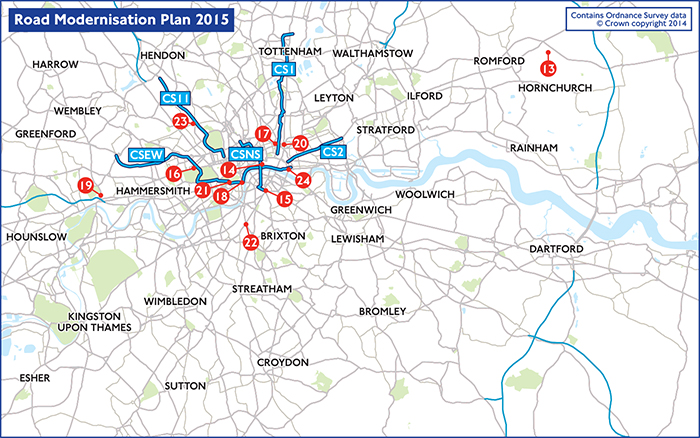 Ardleigh Green Bridge is being upgraded to current highway and safety standards so it can continue to cater for traffic for years to come.

Significant changes are proposed at Blackfriars junction with new pedestrian crossings and signalised cycle crossings to improve access to Queen Victoria Street and Victoria Embankment where the North-South route connects with the East-West Cycle Superhighway via a two-way cycle only connection.

We want to change the road layout at the Elephant & Castle roundabout to improve facilities for all road users and enhance the local environment.

Lancaster Gate can be an intimidating environment for cycling, requiring multiple manoeuvres amid often fast-moving traffic. We propose a direct cycle route through the junction, with northbound cyclists segregated from motorists.

Our plans include creating a more direct route for eastbound traffic by partially removing the one-way system and introducing two-way traffic on Bayswater Road. There would also be improvements for pedestrians, including wider footways in some areas and new and simplified pedestrian crossings.

We are working on proposals to make Old Street roundabout a more pedestrian and cycle-friendly environment.

Parliament Square is used by thousands of cyclists each day. Cycles make up nearly a third of all vehicles in the evening rush hour (Source: TfL Cycling Census 2013). However, there is currently very little dedicated provision for them, and some cyclists have to move across as many as five traffic lanes to pass through the junction.

We propose a segregated, direct and convenient route across the junction for cyclists on the East-West Cycle Superhighway. We would also provide dedicated facilities for cyclists who approach Parliament Square from St Margaret's Street and Broad Sanctuary, with early-start signals and a segregated route around the roundabout.

Parliament Square is also a very busy pedestrian environment. Our proposals include wider footways to create more space for pedestrians, as well as two new pedestrian crossings to improve access to the square itself. However, the changes to traffic signals in the area could mean longer waits at some signalised crossings.

We would accommodate the new cycling and pedestrian facilities by reallocating road space from other vehicles.

Power Road Bridge is being upgraded to make it safer for road users and improve access for cyclists and pedestrians.

We are currently seeking views on changes to the Spur Road gyratory and all of St James's Park as part of the East-West Cycle Superhighway consultation. Consultation runs until March 29 and further details are available on the St James's Park/Green Park consultation page.

Stockwell gyratory is a major junction of the A3 and A203 and carries large volumes of traffic, including cyclists. Cycle Superhighway 7 (CS7) opened here in 2010 and has one of the highest volumes of cyclists anywhere along the route, with an average of 2,500 cyclists per hour during the peak.

We are working with the borough of Lambeth to explore proposals to remove the gyratory, improve access to the Stockwell Memorial Garden and simplify the road layout for all road users. Construction will begin in late 2015.