We're working closely with Islington and Hackney Councils to make the area around Old Street station more friendly for people walking and cycling. We aim to finish most highway works by winter 2022 and the rest by spring 2023.

We're currently improving pedestrian crossings and adding segregated cycle lanes in the area. The roundabout was returned to two-way traffic in 2019.

Restrictions during the pandemic slowed our progress. We also discovered some uncharted utility cables in the ground which had to be diverted to ensure the new main station area has a consistent power supply.

Travel in the area

We'll continue to work closely with the community to keep disruption to a minimum.

Details of how your journey may be affected by our work in the area are on the Old Street roundabout travel advice page. 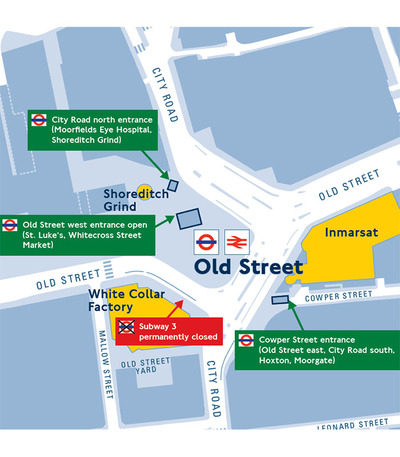 The Subway 3 exit is permanently closed. Customers can use either the Cowper Street entrance, the main station interim entrance or the City Road (north) entrance to go in and out of the station.

To get around at surface level, customers can use crossing points at each end of the Old Street junction.

Old Street roundabout is running in its final configuration - the northwestern arm of the junction is permanently closed and traffic is flowing two-way.

Measures to manage traffic will stay in place at the junction until the scheme highway works are finished in winter 2022.

The right turns from Old Street west into City Road south and from Mallow Street into Old Street east are permanently banned.

Take extra care when walking, cycling and driving in the area - traffic may be coming from a different direction than you're used to.

Check out the quieter times to travel. Our TfL Go app can help you plan your journey.

What we've done so far

The dedicated public liaison officer can answer questions about the works:

For general information about the project, or if you want to receive our quarterly newsletters by email, contact us at:

We held a public consultation on the proposals for Old Street between November 2014 and January 2015.

Contact us if you have questions or comments about the scheme.