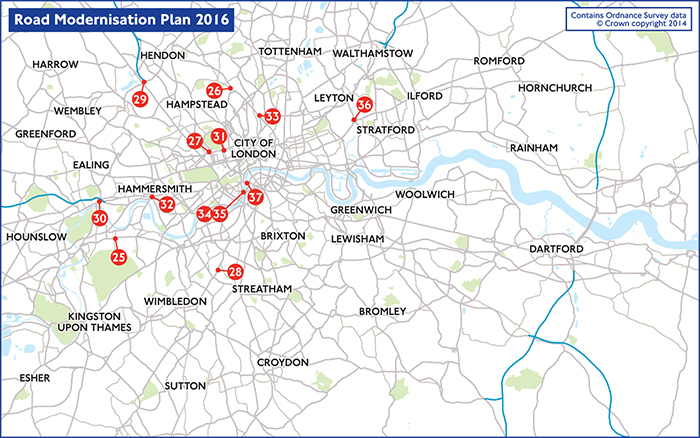 We are working with the London Borough of Richmond upon Thames on a scheme which runs along the A205 Upper Richmond Road West (between A205/Sheen Lane and A205/Priests Bridge Road) and along one of Richmond's key district town centres, as identified within The London Plan.

The scope of the work is to investigate, identify and develop road safety and highway improvements for all users, including pedestrians and cyclists. We're also looking at making improvements to the district town centre which is considered to be in a substandard condition.

We are working with Islington council to transform the Archway gyratory by returning the one-way traffic system to two-way operation. Our proposals will make the town centre more pleasant and accessible, with improvements for cyclists and pedestrians. A public consultation was held from 3 November 2014 to 14 December 2014 and a number of changes have been incorporated into the proposed design. A consultation report will be published in March 2015.

We are working with Wandsworth council to develop proposals for segregated cycle facilities, more trees and making better use of the available road space for traffic, loading and bus stops. The area extends to the junction at Balham station where measures to improve safety and convenience for all users are being assessed, including the potential to introduce a right-turn filter at the traffic lights. Design options are currently being developed.

The Brent Cross Cricklewood regeneration sets out a new network of streets and spaces in and around the area to improve retail, dining and leisure.

We aim to provide a cycling route on Chiswick High Road to help cyclists through this area of heavy traffic area. We're working with Hounslow council to ensure that the route fits in with their wider vision for cycling in the borough.

We also want to make improvements for pedestrians, particularly at the junction with Kew Bridge Road.

We plan to make the Great Portland Street gyratory more accessible for pedestrians and cyclists. A range of designs are being considered which will make it easier for cyclists to travel between Camden and Westminster. We hope to enhance existing pedestrian facilities and improve the local environment. Design is underway and discussions with stakeholders have begun.

We are working with Hammersmith and Fulham council to make Hammersmith gyratory safer and more accessible for cyclists. Our proposals, when ready, will provide major improvements for cyclists, fit in to the borough's wider cycling strategy and complement the long-term vision for Hammersmith. Consultation is expected to take place in late 2015, with construction starting in 2016.

The northern and southern roundabouts at Lambeth Bridge have seen cycle numbers increase in recent years, and now have some of the highest cycle flows in London. Design options to retain and improve, or completely remove the roundabouts are being considered. We are also reviewing the connection between the two roundabouts and hope to make Lambeth Bridge safer and easier for cyclists to use.  Plans will go to public consultation in 2015. Subject to results, construction could begin in 2016.

We are working with Newham council to build a new road system in Stratford town centre to help make the area safer for pedestrians and cyclists. We aim to remove the fast moving multi-lane gyratory system and replace it with two-way roads. Work will build on the success of the recent extension to Cycle Superhighway 2. We aim to consult in early 2016. Construction could start in 2017.

We plan to improve the roundabout to the south of Westminster Bridge so that it's safer, easier to use and more welcoming to cyclists and pedestrians.