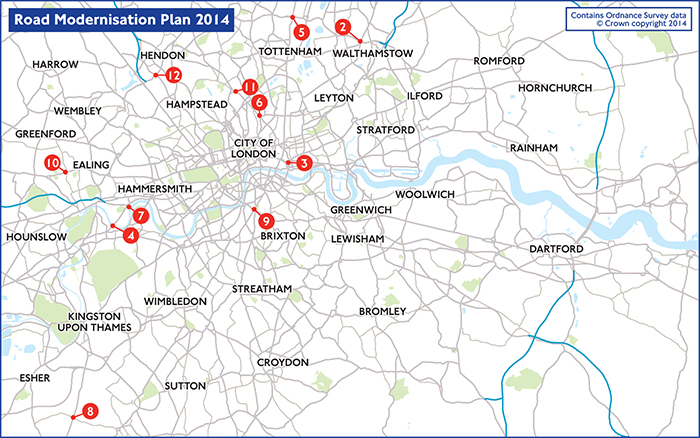 Essential works to the A406 Southend Road in north east London are taking place until late October 2014.

This project, which is being led by the City of London, will create a new public space next to St. Botolph's church and St. Botolph's Street, Aldgate High Street and Minories. Construction is underway and is expected to finish in late 2016.

Work has now started to strengthen and refurbish the 80 year old Grade II listed Chiswick Bridge and make it safe for road users for many years to come.

Work to upgrade the Fore Street Tunnel in north London will continue until the end of 2015. The work will help to keep it safe and fully functional for the 60,000 vehicles that travel through it every day.

We are replacing the 19th-century bridge at Highbury Corner which spans the railway line leading to Highbury & Islington station.

We have completed essential work to refurbish the Hogarth flyover and are now upgrading the pedestrian subways and replanting trees and flowers in the area.

Proposals involve purchasing land in two fields adjacent to the junction so we can widen the east and west arm approaches and exits to two lanes each way. This will increase junction capacity and introduce dedicated right-turn facilities on the north and south arms. New pedestrian crossings will be introduced on the west arm and advanced cycle stop lines on all arms for cyclists.

We plan to redesign four junctions around the Oval triangle to make the area safer for cyclists and other road users.

Southall Broadway will be closed westbound (towards Hayes and Uxbridge) until December 2014. The closure will allow Ealing Council to carry out improvement works along The Broadway.

We are carrying out work to restore Woodlands retaining wall, located on the A406 North Circular