Blaze Laserlights fitted to 12,000 Santander Cycles help to make riders more visible and increase their confidence on the roads. This feature was added in partnership with Santander UK. 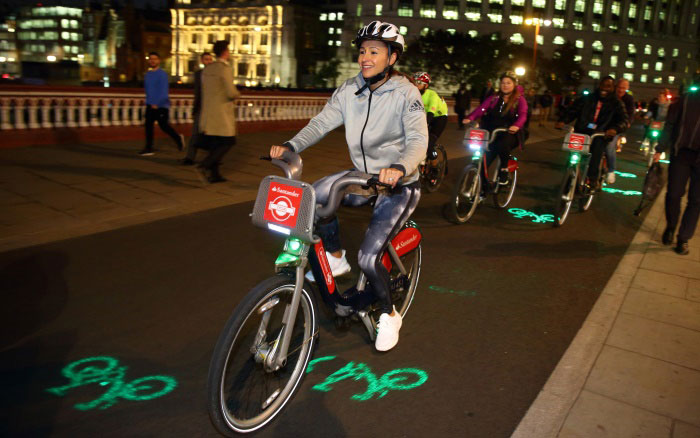 The Blaze Laserlight is fixed to the bicycle frame and projects a green bike-shaped image onto the ground around 6 metres ahead.

Blaze Laserlights are not on e-bikes.

Benefits of the Blaze Laserlight

How Blaze is powered

As the rider pedals, both Blaze and the front and rear flashing LEDs are charged. Blaze automatically turns on in low light conditions, showing in steady state when the rider is moving and flashing when stationary.

If the bike is stationary for more than two minutes Blaze will turn off to save charge. It will also switch automatically to a steady image again once the bike is in motion.

The Laserlight was designed to have the image facing upright as seen from your handlebars.

A green bike will still look like a bicycle when seen upside-down or sideways, or from any angle in between. Its simple, striking image is the most effective way to help you be seen and to keep you safe on the roads.

The light is fixed to the bike and points down to the ground.

The laser image is produced by a relatively low-power Class IIIR laser component, which like all lasers can be hazardous if misused. We recommend that you avoid direct eye exposure to direct or scattered radiation. If the unit is tampered with on the bike in anyway the laser will be damaged beyond use.

The Blaze Laserlight was invented by Emily Brooke, a London-based designer and keen cyclist.

Originally a project for her final year at the University of Brighton, the strength of the innovation won her a place on a Santander funded entrepreneurship programme in Boston. Brooke then decided to develop the project through Kickstarter, where it attracted interest from Santander and TfL.