Speed is a factor in at least 37% of collisions where a person is killed or is seriously injured on London's streets. This is why we're lowering speed limits across London.

We're lowering speed limits on more routes where there's a higher risk of someone being killed or seriously injured. This follows our implementation of a 20mph speed limit on red routes within the Congestion Charging Zone in central London.

The work is part of the Mayor's Vision Zero policy which aims to see no one killed or seriously injured on our roads by 2041.

These roads had their speed limits reduced on 31 March 2022:

Find out more and comment on our plans on the Lowering Speed Limits page on Have Your Say.

The minimum penalty for speeding in this section will be a £100 fine and 3 penalty points added to your licence.

The Metropolitan Police enforce all speed limits in London. They do this using on-street officers, mobile speed cameras and fixed speed cameras. In 2018, 154,785 people were caught and penalised for speeding-related offences, including 38,878 on 20mph limit roads. 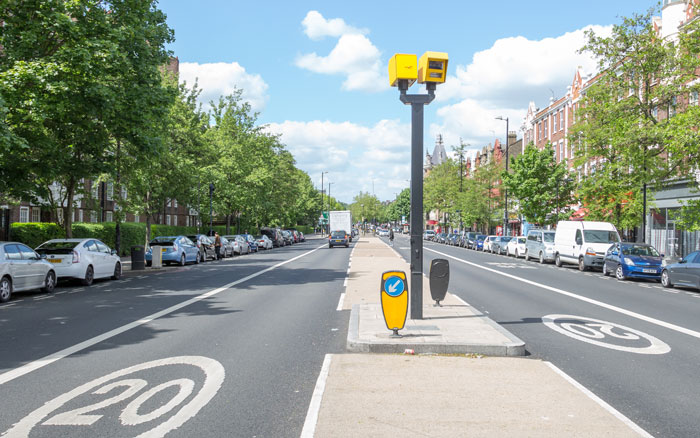 We're lowering speeds in London for a reason. Collision data from around the world is very clear. It shows that the faster a vehicle is travelling:

For example, if you hit someone at 30mph they're five times more likely to die than if you hit them at 20mph. That's why this new limit is so important and why we ask for you as a driver to watch your speed as you're driving through central London. 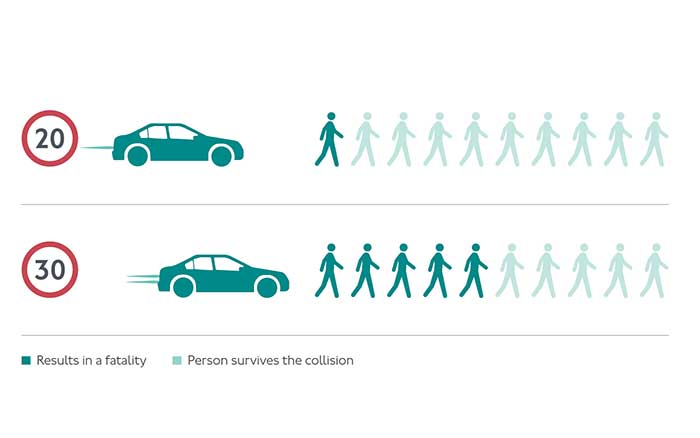 Read tips on how to drive safely in London.

There are many different ways to encourage people to drive at lower speeds, but evidence shows that self-enforcing speed limits are the most successful way to reduce speeds.

A self-enforcing speed limit means that people are more likely to drive within the signed speed limit because they feel it's the easiest and safest speed to drive along that road. This is generally because of the way the road looks and has been designed.

Some of the design and engineering measures used to lower speeds are:

There's no 'one size fits all' approach to reducing vehicle speeds. We use different measures depending on the type of road, who uses the road and the road space available.

We'll continue to monitor the effectiveness of these measures in lowering speeds, so we can determine if more design changes are needed.

Effect on traffic and pollution

Imperial University's evaluation of 20mph zones in London shows they have no net negative impact on exhaust emissions.

It also shows that in 20mph zones vehicles move more smoothly, with fewer accelerations and decelerations, than in 30mph zones. This smoother driving style actually reduces particulate emissions from tyre and brake wear.

We closely monitor changes we make to our roads. This may include looking at possible effects on nearby roads as needed. You can see more of our work and research to into reducing road danger on the Road danger reduction page in Publications & reports.

We've published a toolkit outlining the various speed reduction measures that can be used when designing streets in London.

It can be used by anyone seeking to make our streets safer, healthier and more attractive for walking and cycling. However, it will be of particular relevance to those responsible for implementing specific speed reduction programmes on the Transport for London (TfL) Road Network and local roads managed by the London boroughs.