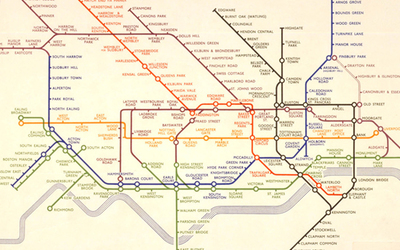 Now recognised across the world, the Tube map was originally the brainchild of Underground electrical draughtsman, Harry Beck, who produced this imaginative and beautifully simple design back in 1933.

Rather than emphasising distance and geographical accuracy, like other maps, Beck based his on the circuit diagrams he drew for his day job; stripping the sprawling Tube network down to a neat diagram of coloured, criss-crossing lines.

Beck's map was initially rejected by the publicity department because it was considered too radical but a successful trial print-run showed that it was just what the public wanted.

The result was an instantly clear and comprehensible chart that would become an essential guide to London - and a template for transport maps the world over.

Beck's revolutionary design, with certain modifications and additions, survives to the present day and is set to serve London Underground and its millions of customers for many years to come.

To find out more more about Harry Beck and his world famous map please visit the London Transport Museum.