We are continuing to work on London Overground service and station improvements to keep up with the growing demand on the network. Improvements are coming across the network including brand new trains for many routes.

We reinvest all our income to run and improve your network so you can expect to see more improvements to services and stations in the future.

Barking Riverside station is the end point for the first extension of London Overground since 2015.

The 4.5 kilometres of railway track connects the Barking Riverside development to Barking in just 7 minutes and to central London in as little as 22 minutes.

The station at Barking Riverside is fully step-free, bringing the total across London Overground to more than 60 stations, helping make London a more accessible city for everyone and support people's independence when travelling in London.

Barking Riverside is the largest housing development in east London, with planning permission for more than 10,000 new homes, including thousands of genuinely affordable homes. As well as commercial and leisure space, new schools and facilities, public open spaces and riverside walks.

Frequency increase for Richmond and Clapham Junction to Stratford

Customers now benefit from a more regular service between Richmond and Clapham Junction to Stratford, introduced in December 2019. Frequency was increased during the morning and evening peak to meet growing demand.

Services increased from four to five trains an hour during peak hours on both the Richmond and Clapham Junction branches, providing a more frequent ten train an hour service on the busiest part of the route between Willesden Junction and Stratford.

Train times are on our London Overground timetables.

They can carry almost 700 people - double the number on the old two-car trains that had been operating on the route. 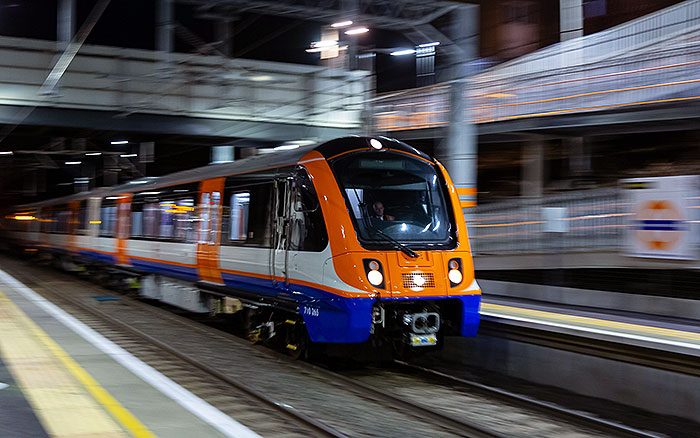 As well as London Overground improvements across the whole network, we are also improving your local stations and the service you receive.

Over half of London Overground stations now have step-free access from street to platform. A further five stations are proposed to be made step-free by 2024 as part of the Department for Transport's Access for All scheme.

Wi-Fi is available at 79 stations and we've improved ticket halls and ticket gates, installed lifts, widened entrances, improved shelters and increased cycle parking. We are also making continuous improvements to enhance accessibility, reliability and service. Our stations are staffed from first train to last and our staff are equipped with devices to keep them up to date with the latest travel information.

As part of our plan to invest in new technology to improve stations and make it even easier for customers to get help when they need it, we're running a 12-week trial of video-linked ticket machines at four stations (Camden Road, Crystal Palace, Bruce Grove and Woodgrange Park) from October 2019.

The video function will link back to a customer service operator who will guide customers through ticket purchasing and provide any other assistance as required. We'll monitor the trial closely to learn how to improve this service for our customers.

Improvement works at the station are now complete. These works also brought wider platforms and a water dispenser where you can fill up your water bottle.

The station has received £3m in funding from the Department for Transport's Access for All fund and £900k from the adjacent Ballymore housing development. The remainder has been invested by TfL.

This is one of the largest Access for All schemes on the London Overground network. It's a key interchange for northwest London, given the proximity to West Hampstead's Thameslink and Tube stations.

We are working closely with Haringey Council as they regenerate the North Tottenham area. As part of these plans we have transformed White Hart Lane station to make it bigger, brighter and more accessible. There is: We worked closely with Crossrail Ltd on the rebuilding of Whitechapel station. This provides a step-free interchange between London Overground and the Elizabeth line.

We work to make sure that all trains and stations are as accessible for all as possible.

We have introduced new class 317 trains onto London Overground routes from Liverpool Street to Enfield, Cheshunt and Chingford. These have wide doors and open carriages.