This twin-bore road tunnel under the Thames in east London will link Silvertown to the Greenwich Peninsula. Site investigations and enabling works are underway, with construction due to start in 2021. The new tunnel is set to open from 2025.

The scheme will reduce congestion at the Blackwall Tunnel and improve the reliability and resilience of the wider road network. It will also transform East London's cross-river bus network.

The RiverLinx consortium was appointed to design, build, finance and maintain the Silvertown Tunnel after a competitive procurement process. The consortium is made up of Aberdeen Standard Investments, BAM PPP PGGM, Cintra, Macquarie Capital and SK Engineering & Construction.

The contract has been published as part of our commitment to transparency. See the Silvertown Tunnel project agreement.

We will only start paying the consortium once the tunnel is open and available for use. We will also be able to reduce payments if the tunnel doesn't meet certain standards, such as being available for traffic. 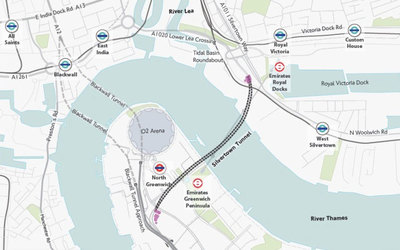 Since we got permission for the tunnel in May 2018 we have worked with landowners to agree how to acquire the land needed. We are also talking to local boroughs and stakeholders about construction logistics and access requirements for residents, visitors and local businesses.

The appointed consortium will regularly update on construction progress. We are also explaining to local residents and businesses how we plan to minimise the environmental impact of the work.

This user charge will pay for building and maintaining the tunnel - it's a legal requirement of the planning approvals and has to be in place when the tunnel opens. Any surplus will be reinvested into public transport across London.

Without the Silvertown Tunnel, congestion and air quality around the Blackwall Tunnel are predicted to get worse as London's population grows.

Our air quality modelling shows there may be a small localised impact - we will put in measures to make sure any increase is minimised. We will keep modelling and monitoring to prevent air quality getting any worse than we forecast in our Environmental Statement.

Both tunnels and the surrounding area will also fall within the Ultra Low Emission Zone from October 2021. Vehicles need to meet the ULEZ emissions standards or their drivers must pay if they drive within the zone.

Our plan is that:

Construction of the scheme will follow the Silvertown Tunnel Code of Construction Practice (CoCP). On-site activities started in 2020. If you have questions about the ongoing works, email help@riverlinxcjv.co.uk or phone 07907 978 486.

We are legally committed to a wide range of improvements and measures to reduce the impact of the new tunnel and support the wider local area.

If you have any questions about the Silvertown Tunnel scheme (not related to construction), please email rivercrossings@tfl.gov.uk.

Benefits of the scheme

The Silvertown Tunnel will connect to the A1020 Silvertown Way/Lower Lea Crossing on the north side and to the A102 Blackwall Tunnel Approach on the south side. The tunnel generally follows the alignment of the Emirates Air Line cable car.

The population and traffic will increase in this area of London because of major developments underway and planned on Greenwich Peninsula and at the Royal Docks, Stratford and Barking Riverside.

The Silvertown Tunnel will offer a more reliable crossing, ensuring goods and services can continue to move around London. It will:

Our short film explains why the Silvertown Tunnel scheme is needed.

Watch our 'drive through' film to see how the new tunnel would link to the existing road network.

Permission for the tunnel

In May 2018, we were granted a Development Consent Order (DCO) by the Department for Transport. The DCO is the formal process by which the Government gives the green light to any development categorised as a Nationally Significant Infrastructure Project (NSIP).

The Secretary of State's decision letter as well as our application documents are on the Planning Inspectorate website.

Under the terms of the DCO a body known as the Silvertown Tunnel Implementation Group (STIG) has been established.

STIG is a consultative group of representatives from London's boroughs, the GLA and Highways England. We are required to consult with STIG on matters related to planning and operating the scheme.

We held a consultation on the Silvertown Tunnel scheme October-November 2015 and before that October-December 2014.

These documents are intended to help explain the Silvertown Tunnel scheme in more detail to a non-technical audience. Our consultation booklet provides an overview of all the key elements and effects of the scheme.

The 'Guide to the consultation documents' sets out a plain English summary of the purpose, methodology and main findings of each of the technical reports.

The following documents outline our assessment of a range of alternative options for addressing the challenges at the Blackwall Tunnel and what effect the Silvertown Tunnel scheme might have on users of the River Thames.

The 'Statement of community consultation' explains other ways you can access the documents on this page, as well as how to contact us and register your views.

These reports are part of a suite of documents that support the statutory public consultation for the Silvertown Tunnel scheme. Among other issues they set out the impacts and benefits of the scheme.

Preliminary case for the scheme

Sets out how the Silvertown Tunnel scheme was developed and the main alternatives that were considered. It outlines the benefits of the scheme and how it meets its objectives.

Also includes in Appendix C our 'Preliminary monitoring and mitigation strategy'. This sets out how we would monitor traffic, air quality and noise levels.

Outlines the user charging proposals for the Blackwall and Silvertown Tunnels and sets out TfL's reasons for proposing user charging, the proposed structure and implementation of the charge and the objectives TfL would take into account in setting the charge and varying it in the future.

Details the main transport impacts of the scheme for all forms of travel and what measures would be taken to minimise any adverse impacts. It also examines road network impacts and impacts on public transport networks and walking and cycling.

Sets out the outline scheme design. It demonstrates why it is a suitable response to the site and its setting, taking into account existing and future planned development and that it can be adequately and safely accessed. It also sets out the design principles which will inform the detailed design, providing examples of how the scheme may develop in the future.

Explains the proposed design of the scheme from an engineering perspective and sets out the assumed method of construction.

Displays the physical elements of the scheme. It includes:

Describes the scheme and the main alternatives considered. A non-technical summary of the PEIR is also available - it summarises the PEIR in plain English.

The PEIR includes a number of technical drawings referenced in each chapter.

The PEIR also includes several appendices. These include:

An appraisal of the scheme's sustainability credentials. It assesses the scheme using a number of methods, including TfL's Sustainability Assessment Toolkit.

Assesses the opportunities for minimising CO2 emissions during construction and operation of the tunnel. It considers the implementation of passive design measures, energy efficiency, and low and zero carbon technologies.

Assesses the scheme's impact on human health and wellbeing. The HIA seeks to recommend mitigation that may improve health and reduce inequalities in health.

Sets out the outline business case for the scheme and assesses:

We have also included a number of appendices to the outline business case. These consider:

These reports contain supplementary information about the Silvertown Tunnel scheme or its impacts. We have published them because they are referenced in some of the reports included in the Main case section.

Sets out the matters that were identified as relevant for consideration in the HIA and a proposed scope and methodology. This was consulted on with relevant health related stakeholders and the results of this informed the development of the preliminary HIA.

We commissioned market research to provide updated information on the opinions of businesses on the Silvertown Tunnel scheme.

On 15 October 2014, we held an event to launch our consultation on the Silvertown Tunnel scheme. The slides we used and a short paper with some notes about the event are available here.

Outcomes of the consultation

This section contains historical reports relating to the need for a crossing to relieve congestion at the Blackwall Tunnel and resolve other issues; the options we considered for addressing these problems; the case for a new tunnel and the impacts the tunnel might have.

Assessment of needs and options

Sets out the evidence for investing in a new crossing to address the congestion and road network resilience issues at the Blackwall Tunnel - it considers alternative options for addressing these issues and comments on the benefits that a new tunnel, with associated user charging, would provide, and presents an economic appraisal of the proposed tunnel scheme and includes an outline of the financing and procurement strategy

Presents the traffic impacts of the Silvertown Tunnel, examining background traffic growth, changes in traffic and related delay and the origins of trips using river crossings, among other areas

Sets out TfL's emerging approach to user charging, setting out the reasons for charging, the anticipated effects of charging and our outline charging proposal

Reports on the outcome of a survey conducted with 800 businesses in eight east London boroughs, to gauge their reaction to proposals for new river crossings

Presents studies into both bored and immersed-tube tunnels as options for building a new tunnel at Silvertown, and further develops the concept of a bored tunnel approach at Silvertown

Assesses contamination risks associated with building a tunnel at Silvertown

Outlines a study into the land-use impacts of various potential crossing options, including an assessment of the impact of each option on development capacity, value and planning risk

Sets out the key features of the 2012 base year traffic assignment model and examines calibration and validation data, trip matrix development and route choice, among other topics

This section includes technical engineering drawings of the proposed tunnel.

Any questions? If you would like to find out more, get in touch: