We plan to relieve congestion and improve accessibility in South Kensington station, including with step-free access to the District and Circle lines. We're also proposing to develop our land around the station to create new homes, shops and office space. 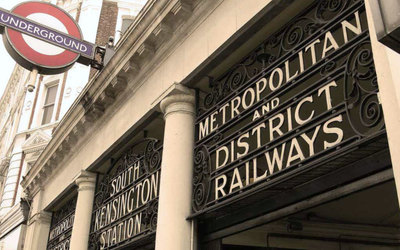 South Kensington station is a gateway to one of London's best-known cultural quarters and popular tourist destinations. It is one of the busiest stations on our network - around 34 million customers pass through each year.

Three separate projects will together enhance the customer experience at the station:

Piccadilly line trains are once again stopping at the station - essential work to replace all five escalators that serve the line there was completed in June 2022.

The escalators - installed in 1973 and at the end of their lifespan - had become unreliable and were the highest priority escalators for replacement on the Tube network.

The station's current ticket hall and the stairs to the District and Circle line platforms are often crowded. Our changes will make journeys through the station quicker, easier and more pleasant.

Development around the station

We're working with Native Land to develop our land around the station. This development will respect the character of the local area and will complete step-free access to District and Circle line trains through a new entrance on Thurloe Street.

We were granted Listed Building Consent by the Royal Borough of Kensington and Chelsea (RBKC) in January 2018 after extensive discussions with the local community.

Our station upgrade will bring quicker, more pleasant journeys, thanks to less congestion. Changes will include:

Work will also enable step-free access to the District and Circle lines to be created as part of the development around the station.

As part of our long-term plans for South Kensington station, space has been allocated for step-free access to the Piccadilly line as part of a potential future scheme.

Development around the station

Proposals to develop the land around the station have been designed by Stirling Prize-winning architects Rogers Stirk Harbour + Partners. They aim to sensitively repair and enhance the Grade-II listed station and surrounding area's historic streets, while also making improvements for the local community.

A new entrance to the station on Thurloe Street will create step-free access:

A four-storey building, with workspaces and shops, is proposed for next to the station entrances.

The design of the new 'Bullnose' building (referred to because of its unique shape) at the front of the station draws on the initial 19th century vision for the site. Structural drawings show it was originally designed to have several floors - the proposed building will mirror the distinct curved shape of the Bullnose and use the iconic sign from above the arcade entrance across the new retail units.

New homes around the station, including along the station side of Pelham Street, will recreate the historic row of buildings that were there before.

The development proposes to upgrade the building along 20-34 Thurloe Street to the north of the station, with new homes behind the historic Regency facade replacing the current apartments. The proposals also include new homes in Thurloe Square to reinstate housing where the square connects with Pelham Place. This was removed when the railway was built.

2020: Planning application submitted to RBKC for development around the station

April 2019: Consultation starts on proposals for development around the station

March 2018: Native Land selected as our preferred partner to help us develop the area around the station

Autumn 2015 (ongoing): Communications begin with local residents and other stakeholders about our plans