Detailed plans for what became the Elizabeth line started in earnest in 2001. Under an agreement between TfL and the Department for Transport, the project organisation Crossrail Limited was created as a subsidiary of TfL in December 2008.

Formal plans for a railway across the middle of London were first proposed in the 19th century, but never realised. Just after World War 2, another attempt under the Abercrombie Plan also came to nothing. It wasn't until the 1974 London Rail Study that 'Crossrail' got its name.

Sixteen years later, in 1990, British Rail and London Transport got Government permission to start making plans for the east-west railway, including a section built under Central London. However, cost concerns kept the project on hold for another decade. Find out more about this history on the Crossrail website. 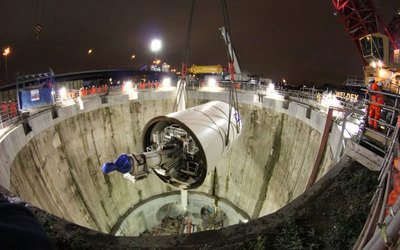 The real momentum behind the project started in 2001 when Crossrail Ltd. was formed under a joint sponsorship between TfL and the Department for Transport. The Crossrail Act passed in 2008 gave it permission to 'build, operate and maintain' the new railway across London.

The company broke ground at Canary Wharf in May 2009 and tunnelling started in May 2012. Find out how the railway was built on the Crossrail website. 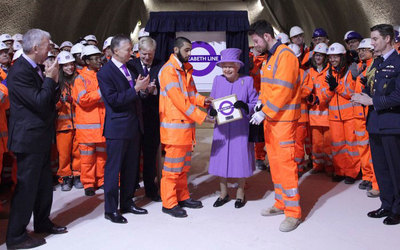 The Elizabeth line gets its name

In February 2016 HM the Queen unveiled the new roundel for the Elizabeth line, cheered on by staff who had been building the tunnels in the central portion of the line.

TfL Rail services opened between Liverpool Street and Shenfield May 2015 to form what would become the eastern branch of the Elizabeth line. Stations along the line were refurbished, with some getting new ticket halls and upgraded facilities. 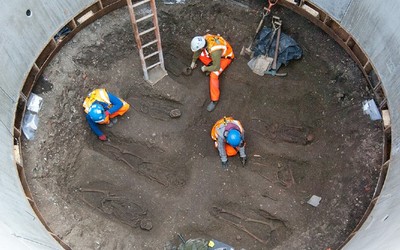 More than 10,000 objects were unearthed during the build in one of the UK's most extensive archaeological programmes. Find out more about the archaeological investigations on the Crossrail website.